For SEO professionals, change can often seem like the only constant.

Google, the dominant player in search, introduces thousands of changes to its algorithm each year. In the case of major updates, whole subject categories can be substantially reorganized, scrambling keyword rankings. Other innovations restructure the search engine’s priorities, altering the way the algorithm discerns user intent in text.

For SEO experts and their clients, these algorithmic shifts can have dire consequences. In the wake of a significant update, affected sites can find their organic traffic slashed. In certain nightmare scenarios, businesses can be penalized for ill-advised SEO tactics – a disaster every SEO professional dreads. What’s it really like to work in this arena where uncertainty is a given and mistakes can prove so costly?

We surveyed nearly 500 SEO specialists about their professional experiences, including the anxiety of aiming for Google’s constantly moving target. Our findings reveal the challenges they frequently encounter and the approaches they take to stay informed in an evolving industry. To learn more about their perspectives and predictions for the field of SEO, keep reading.

Describing SEO … and Struggling to Do So

According to some existing research, SEO experts would seem likely to be happy. Studies indicate that professionals in internet-centric fields tend to be satisfied, and marketing specialists have expressed contentment in past surveys.

Our results confirm this view, with over two-thirds of respondents reporting satisfaction with their jobs. In an era of widespread professional dissatisfaction, this finding speaks well of the industry as a whole. 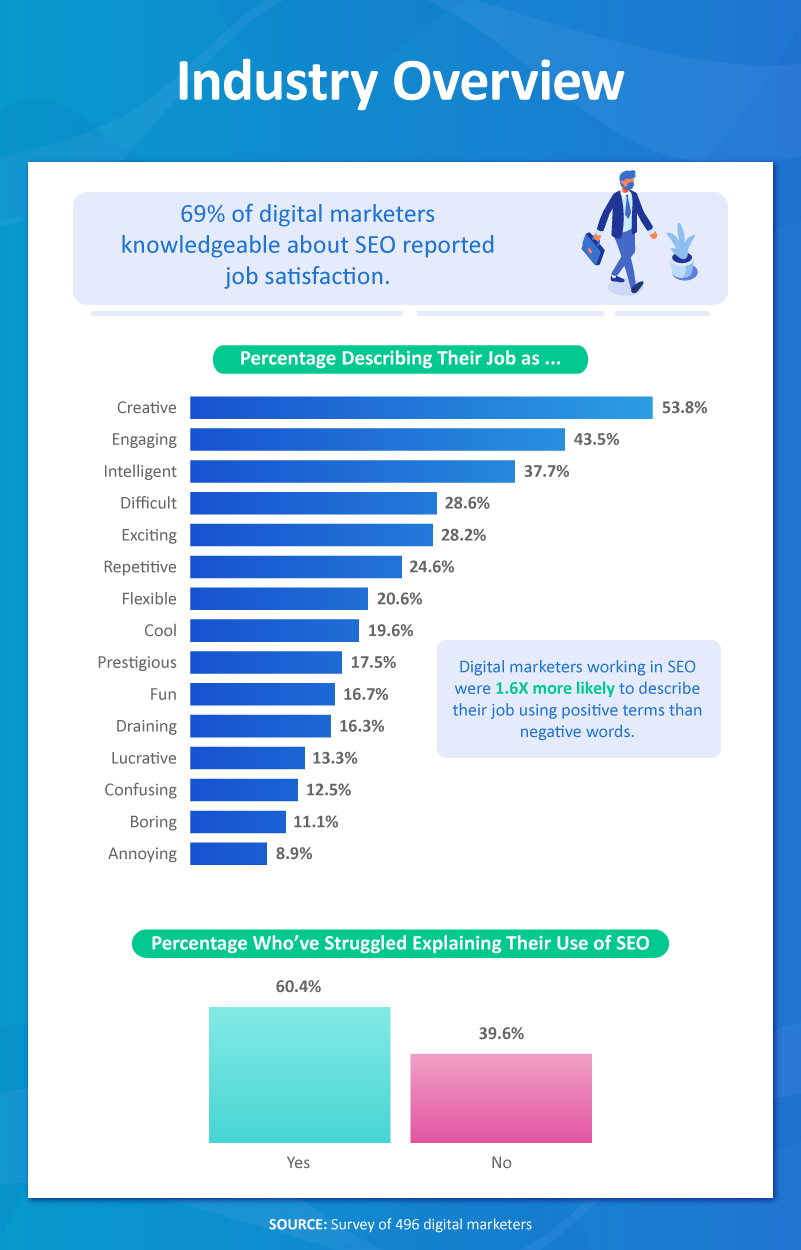 Moreover, respondents were most likely to use positive words to describe their roles, choosing terms such as “creative,” “engaging,” and “intelligent.” However, more than 1 in 4 called their work “difficult,” while nearly as many used the term “repetitive.” This range of experiences speaks to the diverse set of tasks that form the field of SEO, from implementing highly technical improvements to compelling storytelling through content.

This varied set of tasks can also pose challenges in describing one’s duties: More than 60% said they had struggled to explain exactly what they do in SEO. Moreover, the basic principles of the field can be hard to understand for the uninitiated. Many business owners lack crucial SEO knowledge, and the general public is probably even more mystified. 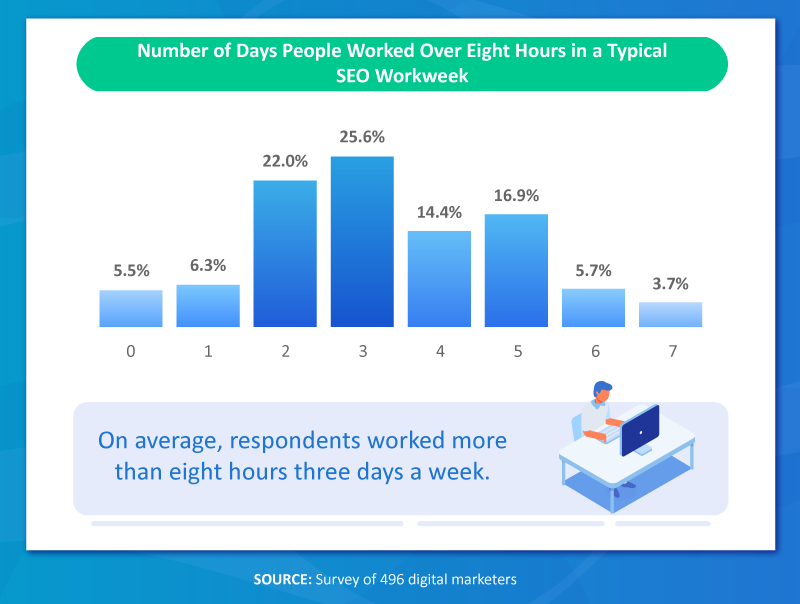 SEO experts are hardly strangers to long hours: On an average of three days a week, respondents exceeded the typical eight-hour workday. Moreover, roughly a quarter of SEO experts worked for over eight hours five or more days a week. These difficult schedules may reflect the demands of the marketing industry more generally. One recent study of agency professionals found that grueling hours and burnout are common across the field. 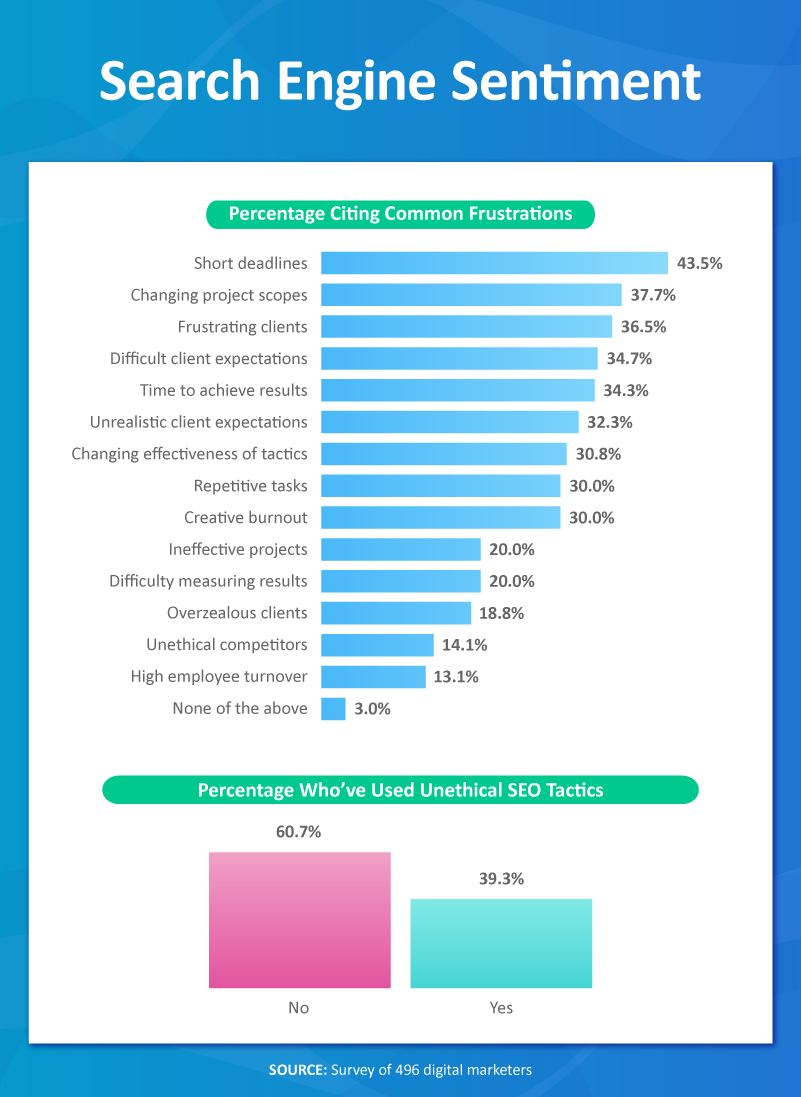 One reason for such demanding schedules may be tough deadlines: Nearly 44% of respondents said they were frustrated by short time frames. Related aggravations were also quite common, including shifting project scopes, frustrating clients, and high expectations. Once again, these challenges affect more than SEO professionals alone: The entire marketing and advertising sector is widely regarded as especially stressful.

However, some SEO-specific concerns also emerged: Over a third of respondents felt frustrated about the length of time required to achieve results, while 31% struggled with the changing effectiveness of tactics. SEO professionals often wrestle with underwhelming results at first, achieving real gains only after months of experimentation. Even when they identify winning tactics, future updates could soon render them ineffective.

Perhaps in response to these challenges, 39% of respondents admitted to using unethical SEO tactics to generate results. Additionally, half of respondents said they knew someone else who had done so. These so-called “black hat” tactics may seem effective at first, but they can backfire spectacularly by incurring a penalty.

Our respondents differed significantly in their career aspirations, though most did not envision an extended future in SEO. The majority planned to work in SEO for between one and six more years, while just under 12% expected to remain in the industry for the rest of their career.

This finding could demonstrate the challenges of SEO specifically, but might also reflect a broader trend of frequent employment changes among American professionals. Moreover, SEO experts might plan to remain in digital marketing but shift to another one of the field’s many facets. 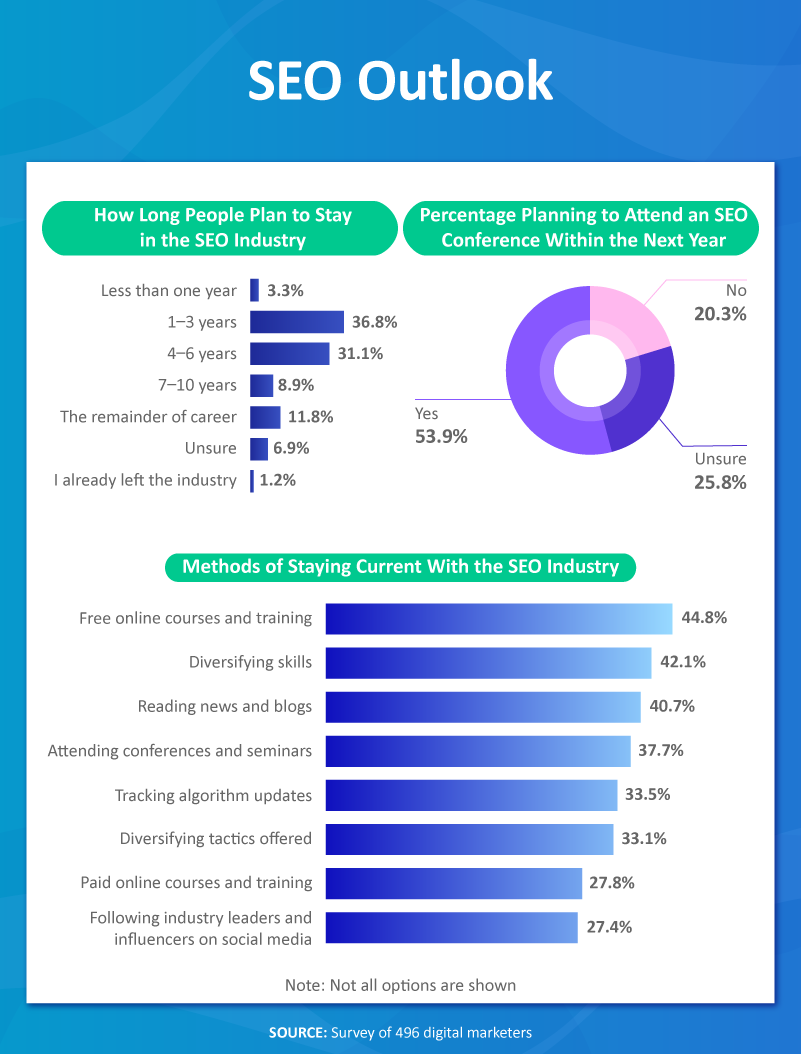 In light of the industry’s pattern of ongoing change, many marketers sought to stay current with the latest SEO best practices. The most common method for doing so was free online courses and training: There is a rich array of high-quality SEO courses out there. Forty-two percent diversified their own skill sets to stay up to speed, while a similar percentage read industry news and blogs.

Interestingly, a majority of respondents planned to attend at least one industry conference within the next year. Some of the country’s most buzzed-about marketing conferences have a heavy SEO emphasis with plenty of opportunities to learn about emerging trends and tactics.

Unfortunately, just 45% of SEO specialists felt their jobs were secure. Additionally, nearly a quarter described their current positions as precarious. 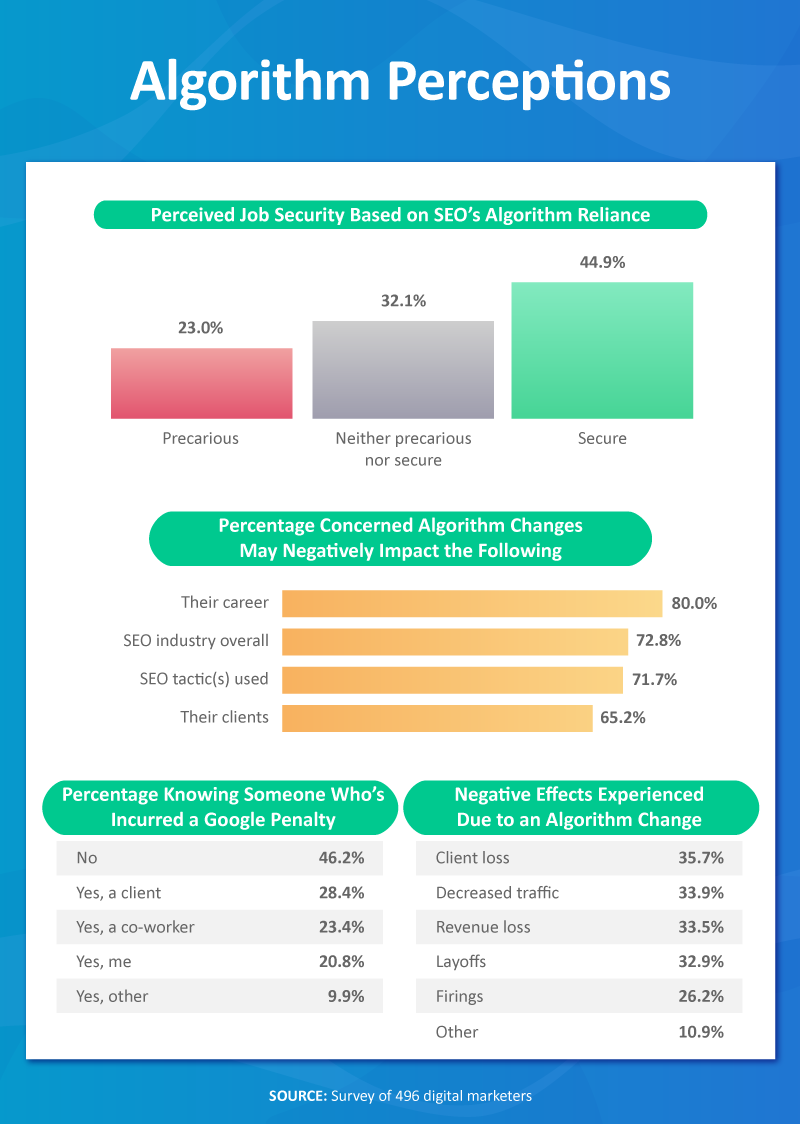 Much of this perceived instability related to possible shifts in Google’s algorithm. Four in 5 felt such a change could negatively impact their career, while 73% believed an update could hurt the industry overall. Slightly fewer worried that changes could adversely affect their tactics and clients. With past updates, Google has been transparent about these possibilities: When the algorithm shifts, some domains will naturally suffer.

Perhaps in response to these concerns, SEO experts tended to take a dim view of Google’s power more generally. For professionals whose livelihood revolves around search engines, our respondents were strikingly critical of Google’s influence:

Furthermore, most SEO professionals knew someone who had incurred a Google penalty – a potentially devastating blow. Over a quarter reported that a client had been penalized, many of which lost that client as a result. Other common consequences of these penalties were decreased traffic, lost revenue, and layoffs. Though search penalties can be reversed with time and concerted effort, they clearly have serious implications for the livelihoods of all involved.

Though SEO may continually evolve, most experts were in agreement about its future prominence: Three-quarters felt the field would only become more important over time. However, they voiced quite varied views about the effectiveness of various tactics, both now and in the future.

Thirty-one percent felt optimizing for AI was effective and worthwhile, and 29% said doing so would be even more important in five years. Google has been explicit about its increasing reliance on AI tools to determine search rankings, such as its powerful RankBrain program. There was also considerable approval for mobile optimization and upgrading to secure HTTP, both widely considered basic SEO best practices. Yet, 15% also deemed buying backlinks effective, despite Google’s clear guidelines against doing so. Clearly, there remains considerable disagreement about the merits of certain SEO shortcuts.

However, when asked to predict what Google would prioritize in the years to come, the most common response was the quality of content. This view resonates with Google’s stated priorities for future updates. Time and again, the search giant has urged marketers to create useful and comprehensive pages, and this value seems likely to persist. Interestingly, 45% of respondents felt Google would prioritize social shares in the future, although most experts agree that social media activity influences SEO only indirectly.

Partnering for the Unpredictable

Our findings indicate significant unease among SEO experts in relation to the nature of their work. Some sources of anxiety will be familiar to most marketers, including short deadlines, shifting scopes, and demanding clients. Other concerns relate more directly to aspects of SEO, particularly those beyond their control. Most felt that a future change to Google’s algorithm could adversely affect their clients, their careers, and their industry at large.

Yet, our results also showcase several strategies that SEO specialists use to hone their crafts, thereby preventing painful setbacks. Moreover, most felt content in their professional lives and confident that their work would become even more essential in the years to come.

For organizations seeking help with their SEO objectives, some keys to selecting an agency seem clear. When choosing a partner for your SEO efforts, you’ll need a flexible provider with a clear view of present conditions and developing trends. At BestSEOCompanies.com, we help all kinds of businesses find the perfect agency, with recommendations tailored to their industry and goals. Whatever the future of SEO holds, we’ll help you hire a team that lets you capitalize on change, not cower from it.

For this study, we administered online surveys to 496 digital marketers via Amazon Mechanical Turk. To qualify for this survey, respondents must have indicated that they worked in digital marketing and be very or extremely knowledgeable in search engine optimization (SEO). Of the 496 respondents surveyed, 41.3% identified as female, and 58.7% were male. The average age of respondents was 32. An attention-check question was employed to identify and disqualify respondents who failed to read the questions in their entirety. The main limitation of this study is the reliance on self-reported data. Self-report is faced with myriad issues which include, but not limited to, the following: recency bias, telescoping, exaggeration, and attribution.

Know an SEO pro who might appreciate our findings or a colleague who might empathize with our respondents’ sentiments? Feel free to share our work with them or any other readers who might be interested. We simply ask that you link back to this page whenever you cite our work. Additionally, please use our findings exclusively for noncommercial purposes.