Since its passage in 1990, the Americans with Disabilities Act (ADA) has transformed many of the country’s public spaces, empowering millions to access goods, services, and other resources. Yet, in another essential domain, no such progress has been possible: Many websites remain inaccessible to people with disabilities, such as impaired vision or hearing.

This phenomenon stems from the murky legal landscape surrounding accessibility online. While the ADA requires most large and midsize businesses to accommodate users with disabilities, no specific, enforceable standards currently exist for ADA-compliant web development. This ambiguity has fueled a rash of discrimination lawsuits against major corporations, yielding mixed results and continuing uncertainty. 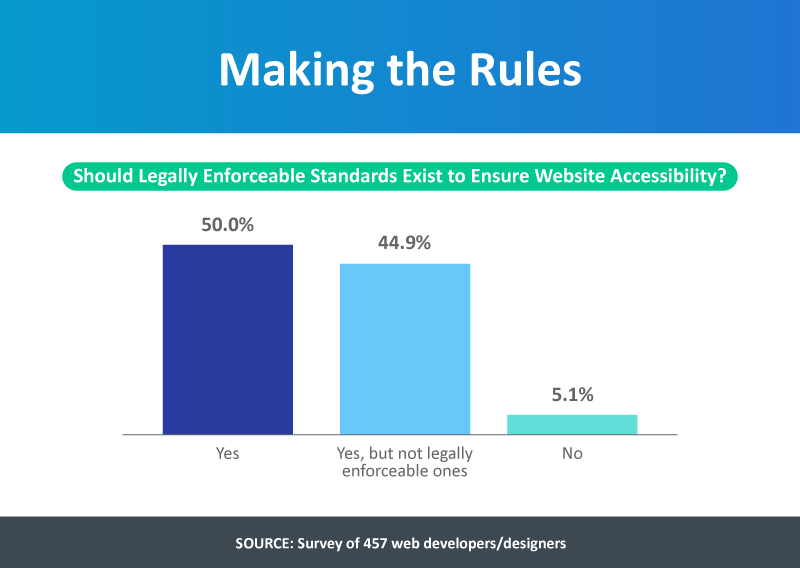 To further study this subject, we also tested thousands of different sites using an accessibility-checker tool and determined just how accommodating various types of domains tend to be. Our findings reveal significant and surprising shortcomings but also present some pathways to a more equitable internet. For crucial insights regarding accessible site design, keep reading. 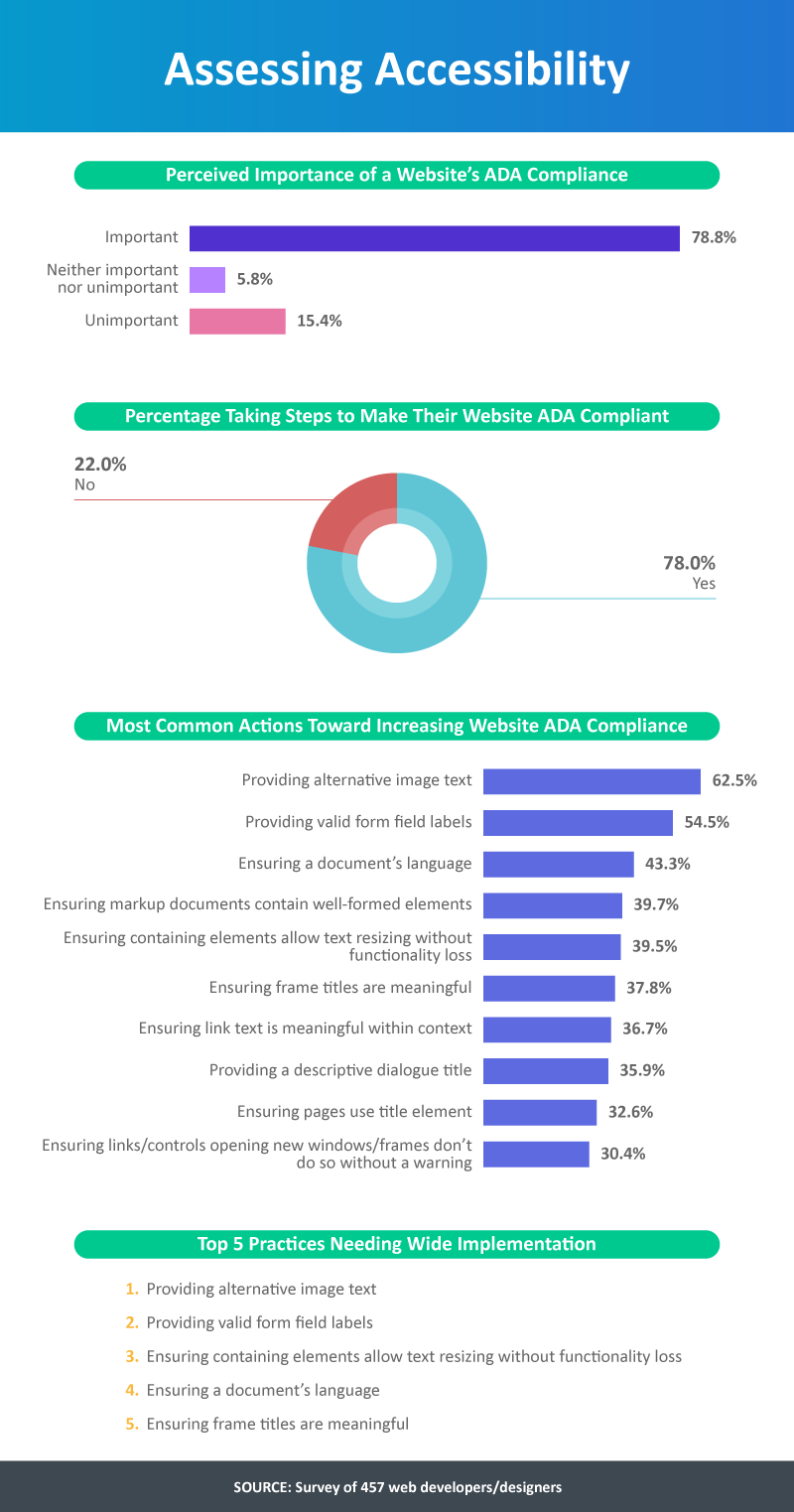 Of course, some of these adjustments might not be motivated purely by a desire to expand accessibility. Many of the measures that benefit users with disabilities are also smart SEO tactics. For example, almost 63% had provided “alt text” for images, which enables “screen reader” applications to describe image content for visually impaired users. But alt text is also the way in which search engines understand image content, so adding it is considered a basic SEO best practice. Another common measure was providing valid labels for forms fields. From a customer acquisition perspective, it’s wise to help individuals with visual impairments provide their personal information.

When asked which kinds of sites were most likely to comply with ADA standards, a plurality of developers believed news outlets would have the best accessibility practices. Conversely, less than 4% believed gaming sites would be most accessible. Our respondents could not have been more mistaken. 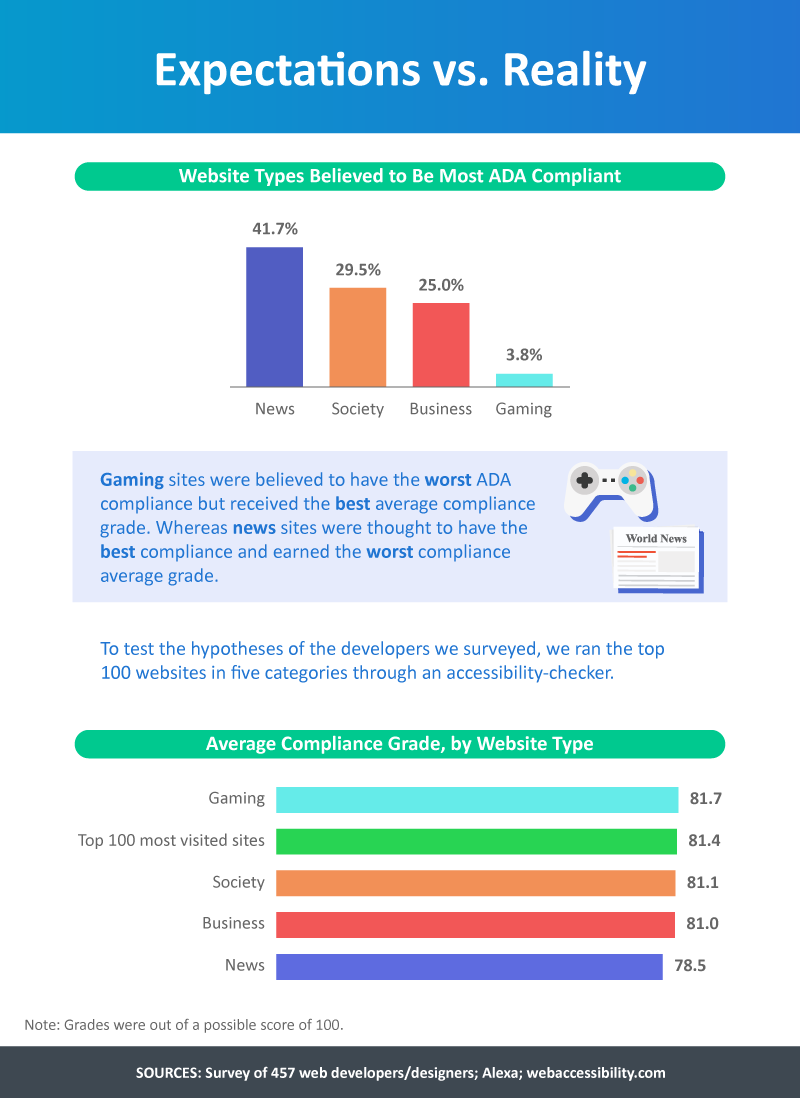 When we tested the ADA compliance of different kinds of sites, gaming domains had the best average compliance grade, while news sites actually had the lowest average rating. It’s possible that the admirable accessibility of gaming sites reflects a broader shift in gaming culture toward accommodating players with disabilities. On the other hand, the poor performance of news sites raises troubling questions about access to critical public information. Similarly, while many respondents assumed government websites would be completely compliant, none of the federal sites we tested were perfectly accessible.

When we tested the internet’s 100 most popular sites for compliance, they performed nearly as well as gaming domains. With this finding, it’s difficult to determine cause and effect: Does accessibility contribute to popularity, or are popular sites simply well-funded enough to invest in accommodations for users with disabilities? Perhaps powerful domains have more to fear in terms of legal exposure. As accessibility litigation becomes increasingly common, the internet’s most visited sites have particular reason to comply with ADA principles.

Among the sites we studied, which accessibility shortcomings were most common? The best practice that most often went ignored was ensuring that links to new windows or frames did not open without warning. Although many developers overlook this step, this practice can be important: For individuals with visual or cognitive disabilities, a sudden, unexplained shift to new content can be disorienting.

In thousands of cases, simpler measures were also ignored. In over 4,300 instances, websites failed to use meaningful, contextual link text. This step entails using distinct, descriptive hyperlink text, rather than generic options, such as “click here.” Furthermore, we found nearly 4,000 cases in which no alt text was provided for images. Clearly, even straightforward accessibility measures are often neglected.

Interestingly, certain shortcomings were most common among particular sites. For example, gaming sites were especially likely to fall short in providing meaningful link text, perhaps because of generic hyperlinks, such as “play” or “play here.” Social media sites, by contrast, tended to have alt text issues. Indeed, some social media platforms do not allow users to add alt text to the images they upload or require them to change their settings to do so.

When we asked developers whether they’d ever experienced consequences due to having an inaccessible website, roughly a third said they had, although this group reported widely divergent outcomes. 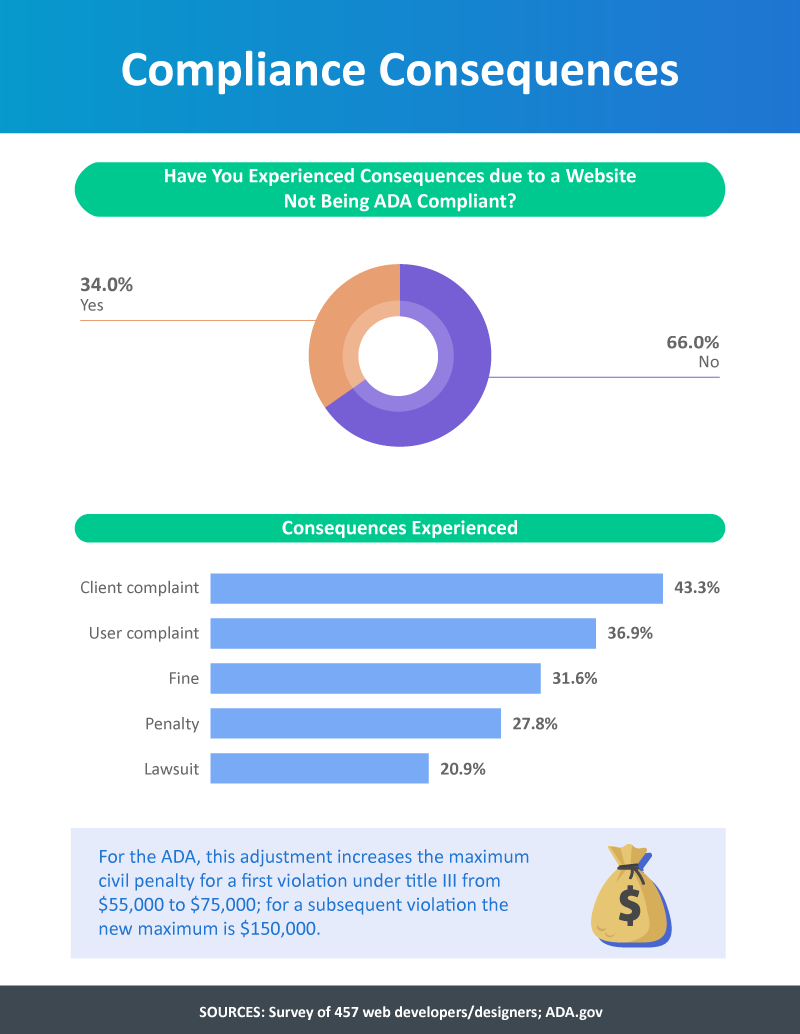 The most common experience was a complaint from a client: The company that hired the developer recognized the shortcoming. In another 36% of these cases, a user complained. These outcomes might reflect real progress in advocacy, as individuals with disabilities speak up for themselves and companies keep them in mind.

More severe consequences were also relatively common, with a considerable percentage reporting fines and penalties as a result of accessibility shortcomings. According to the latest federal standards, the maximum financial penalty for such an ADA violation could be as high as $150,000 for repeat offenders. Additionally, among developers who reported noncompliance consequences, more than a fifth said a lawsuit had been filed. Some major corporations, such as Domino’s Pizza, have recently been named in litigation involving website accessibility, and hundreds of similar lawsuits are filed each year.

Our findings present a wide array of website accessibility concerns for companies and developers to consider. Furthermore, failing to support users with disabilities can have painful ramifications, from losing prospective customers to dealing with lawsuits and fines. Accordingly, building an accessible website is both ethically sound and financially prudent. To reach new audiences and avoid negative repercussions, invest in making your website functional for all.

As mentioned earlier, accessibility improvements can also advance your SEO goals. From alt text to responsive design, many measures intended for users with disabilities are also SEO best practices. However, successfully implementing these techniques can be a complex, nuanced process, and you’ll need expertise to succeed.

At BestSEO, we translate a client’s goals into concrete solutions through a holistic and effective approach to search strategy. We make your site more accessible and appealing to your audience, no matter what your customers’ needs and interests may be. Learn more about our services today, and see how we can put your message in front of more customers.

To test the compliance levels of the websites included in the following categories – news, business, society, gaming, and the top 100 most visited websites overall – each website was plugged into a compliance-checker (webaccessibility.com) that listed the number of instances where each “best practice” wasn’t used.

In addition to the data from the compliance-checker, a survey was run of 457 web developers/designers. They were asked about the best practices they’d utilized for their own site, as well as ones they’d used for clients, if they’d ever suffered consequences from not having a compliant website, the advice they’d give to others, etc.

For the groupings of website types, the topics falling under each umbrella can be found here.All were sourced from alexa.com/topsites/category

Websites were run through the compliance-checker in January of 2020. All survey responses are self-reported, which can come with issues such as telescoping and exaggeration. An attention check was used in the survey to help ensure only those paying full attention were allowed to finish the survey.

If you believe strongly in an accessible internet, we kindly ask that you help share our work. By doing so, you’ll help bring greater attention to the barriers and inequities discussed in this project. If you do share or cite our work, please link back to this page so that others can view the project in its entirety. We also request that you please use our images and information purely for noncommercial purposes.