How Do Businesses Handle Their Online Reviews [Study]

Customer feedback is nearly as valuable as the customer themselves – reviews and suggestions can boost marketing, encourage employees, or change the very way a business functions. But with a multitude of different platforms for the public to leave feedback (including online reviews, comment forms, or in-person), how can business owners handle the barrage of compliments and complaints? These accumulating reviews hold crucial information that’s more important to future customers than ever before.

By surveying over 500 employees who work with reputation management and customer review data, we have created an intensive study on exactly how today’s businesses are handling their reviews. How often are they concerning themselves with feedback? How do they respond to a negative comment? Are they aware of how online reviews affect their SEO? And how are various response strategies working out? Keep reading to answer these questions and better understand how to control the chain reaction kicked off by a customer review.

Finding and Responding to Reviews

First, we wanted to know, how are reputation managers finding reviews in the first place? We also asked about the frequency of both receiving and responding to reviews and whether they’ve gone out of their way to actively solicit additional reviews.

In spite of Yelp’s notoriety as a review hub, Google reviews are the first port of call for many managers looking for feedback about their business. A third of reputation managers searched Google for reviews, while only 12% checked Yelp. A study by Yelp found that businesses tend to receive more positive average ratings on Google than on Yelp or the Better Business Bureau, which perhaps makes for a better experience for business managers who read reviews frequently.

The review-checking frequency was relatively high – more than 1 in 10 managers were checking reviews every single day, while another quarter was checking every week, indicating that business owners get a great deal of value from what they find. That said, in order to check for reviews every day, you need a lot of customers to potentially leave feedback: Small and micro-sized companies were less likely to check every month than midsized ones. Too much feedback can also become an issue, as large companies also tend to check reviews less frequently than midsized ones, perhaps as a result of too much feedback to manage distributed around too many review sites.

Reputation managers were more likely to respond to a positive review than a negative one – an interesting flip of the phenomenon whereby a customer is more likely to leave a negative review than a positive one. On social media, replying to reviews (positive or negative) can actually help the algorithm work in your favor and make your page more likely to be discovered. Eighteen percent of managers reported actively soliciting reviews on social media – more often than on any other review platform. Positive reviews can also serve as customer testimonials, which boost business credibility and trust.

Responding to Reviews as a Manager

Not all forms of feedback are created equal in the eyes of a business reputation specialist. This section of our study asked respondents which types of feedback they act on, how they respond, and what they feel are the best ways to handle both positive and negative reviews. 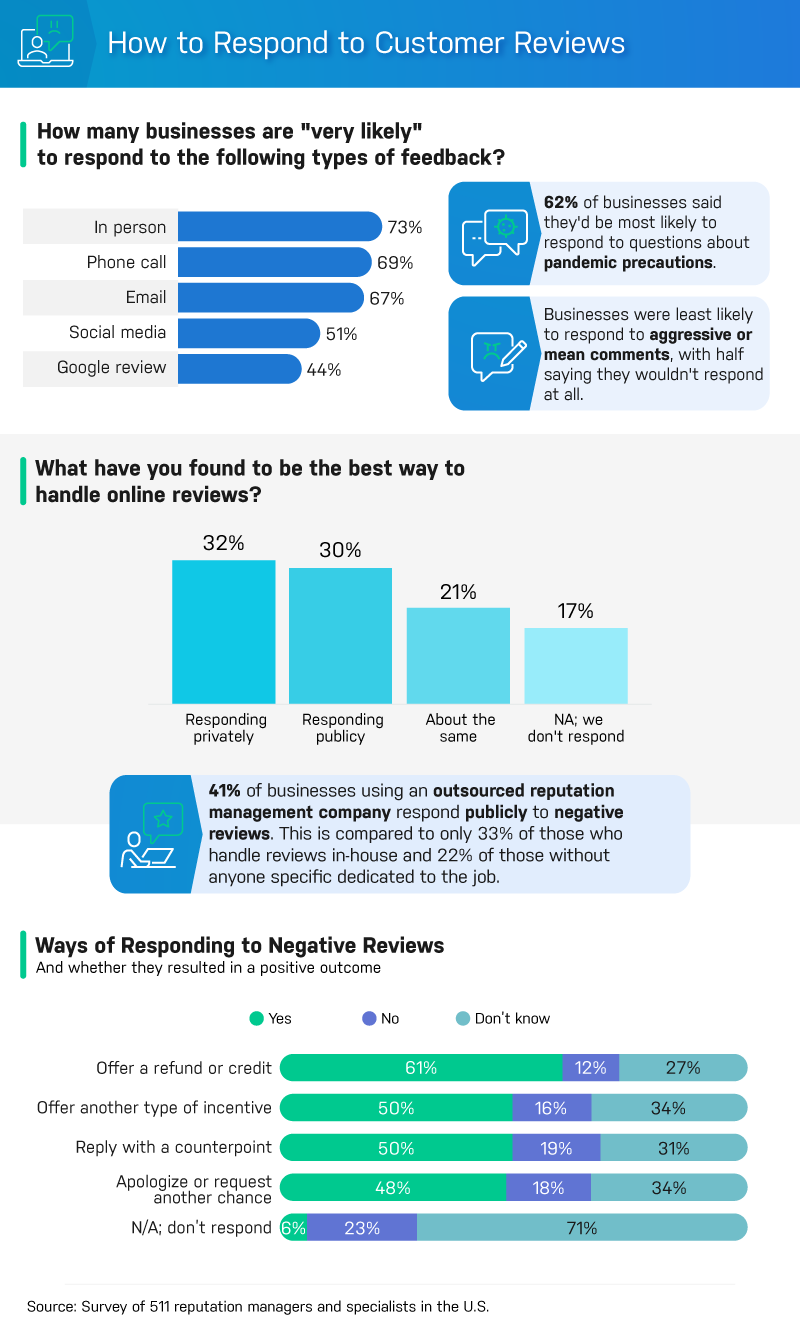 Even in the digital age, face-to-face feedback still garners the highest likelihood of a manager’s response: 73% of managers said they act on in-person feedback, compared to just 44% who react to Google reviews. They were most likely to take the time to respond to questions about the pandemic (62%), especially if their business was primarily in-person (87%). That said, managers demonstrated a high likelihood of acting on or responding to all types of feedback in all types of formats. Nearly a third said they even respond to aggressive and mean comments.

When a customer left negative feedback online, a quarter of managers attempted to have it removed. Complete removal, however, appeared to be a relatively unsuccessful approach compared with converting the comment. When people attempted to reach out to the customer (privately or publicly), 44% had success in converting the negative comment into a positive one. Businesses that outsourced to a specialized reputation management company increased the likelihood of a turnaround by an additional 9 percentage points.

In addition to a simple response, businesses have a real opportunity for fundamental change after receiving feedback. The last section of our study asks managers how often feedback leads to internal discussions and what their biggest obstacles are in handling the information. We also asked how well they understood feedback’s impact on their business’ SEO and how their company had ultimately changed in response to feedback. 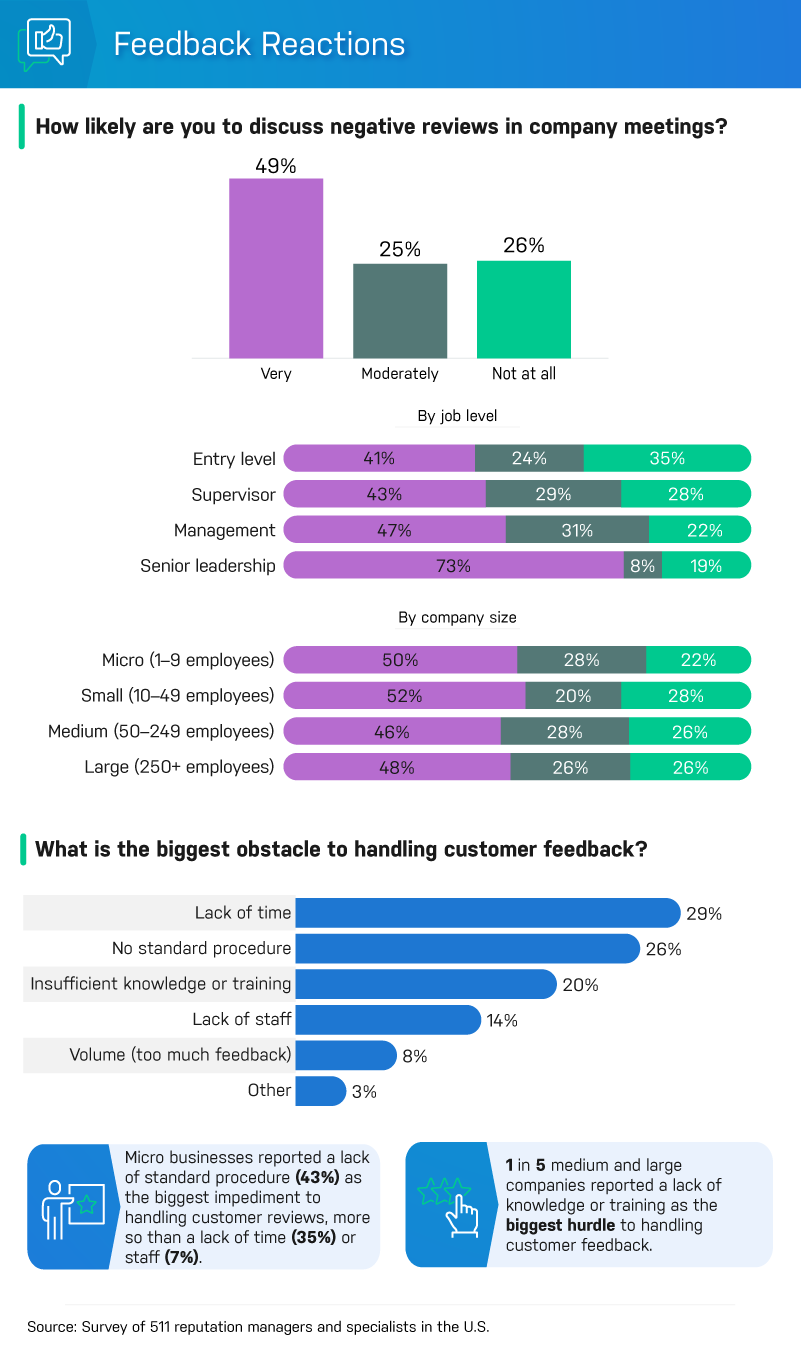 There’s a high likelihood that when a customer leaves a negative review, it ends up being brought up at the next meeting of the business in question. Forty-nine percent of reputation managers said a negative review was “very likely” to be discussed in a business meeting, while 25% considered it moderately likely. This is perhaps why the No. 1 obstacle to managing feedback was time, followed by a lack of standard procedure.

Reviews also heavily impact SEO, or a company’s ability to be found online. In fact, negative and positive reviews both boost SEO by increasing engagement and brand interest in the eyes of the algorithm. When we asked how well business owners understood this concept, we found that most (63%) incorrectly believed that only positive reviews have SEO value. Twenty-eight percent even though that online reviews have no impact at all.

Handling a negative review may not feel great initially, but having thick enough skin to both hear and react to the feedback presents a great opportunity for business owners. Those who worked with the customer were often able to convert their negative review to a positive one, while those who addressed the criticism on an operational level were actually able to improve their business as a whole. And although some business owners didn’t yet understand the concept, both positive and negative reviews can help your company’s SEO.

If you’re like one of the many managers we spoke to, your understanding of SEO may need some work, especially considering how important it is to the health of your business. If you’re in need of expert advice and help, BestSEOcompanies.com is the absolute best place to go. BestSEOComapnies entire mission is to help you rank higher on search engines so that customers from near and far can find your products. To get started with BestSEOCompanies, head to our website today.

We used Prolific to collect the responses of 511 reputation managers in the U.S. 63% of our participants identified as women, 36% identified as men, and roughly 1% identified as nonbinary or nonconforming. Participants ranged in age from 19 to 62 with a mean of 33 and a standard deviation of 8.7. Those who failed an attention-check question were disqualified.

The data we are presenting rely on self-report. There are many issues with self-reported data. These issues include, but are not limited to, the following: selective memory, telescoping, attribution, and exaggeration.

Another way to help SEO is to present engaging and well-researched content to your audience. If you’re inclined to share this study, you are free to do so. Just be sure your purposes are noncommercial and that you link back to this page.