Imagine yourself walking down the cereal aisle of a grocery store. You’re surrounded by hundreds of boxes, all the same size and many with the same ingredients. So what is it that makes you reach for one over the other? Is it the colors? The words? Maybe just your favorite flavors sticking out to you? Or maybe, just maybe, is it the friendly mascot that really cinches the deal?

Advertising execs and marketing experts spend painstaking hours not only creating these mascots, but reworking and re-imagining them over the years, and for good reason. A mascot creates a brand personality and strengthens an existing brand identity. They also help to reinforce top-of-mind awareness and can even outweigh the cereal itself in terms of importance.

With this in mind, we invite you to join us on our recent study of cereal mascots on the American psyche. We showed dozens of pictures of cereal mascots to more than 1,000 people across the country, but we withheld the name of the actual cereal. Respondents ultimately showed us which mascots were the most effective from a marketing standpoint. Oftentimes, they like the mascot more than the cereal itself, showing just how powerful those little animated characters can be. If you want to know why you really gravitate toward your favorite breakfast, keep reading.

Evolving With the Times

Before getting into respondent feedback, we want to give you an idea of just how much these characters have grown and evolved over the years. The following five mascots were chosen based on the ones Americans most often recognized, although they look quite different today than they used to.

Evolution of the Fruity Pebbles Box

Evolution of the Lucky Charms Box

Evolution of the Cap’n Crunch Box

Evolution of the Frosted Flakes Box

Evolution of the Rice Krispies Box

The first Fruity Pebbles box from 2020 showing an ecstatic Fred Flinstone and Barney Rubble. They’re jumping for joy, presumably because of just how good the cereal inside is. Their joy radiates outward and is almost contagious. Compare this to the version from 1980, where Barney was noticeably absent. Fred still looks pretty happy but not enough to become airborne. Instead, the popularity of the show itself may have skyrocketed Fruity Pebbles to fame, even without the modern improvements to the box design. The Flintstones was the longest-running and most financially successful network animated television series until The Simpsons came along. Later this year the box updated again, swapping Barney for Dino, who still appears to be jumping for joy and making a splash in the cereal.

Lucky Charms also has an interesting history of change. The original box from 1963 didn’t even have a mascot! It wasn’t until 1964 that product developer John Holahan graced each box with Lucky – formerly known as L.C. Leprechaun. Lucky has only gotten better with age. In fact, the original design is the oldest looking one. Today’s version is much more sprightly and springing to action, serving up the “magically delicious” charms we consume today. For the brand’s 50th anniversary, Lucky Charms turned its box entirely green and even added a new green clover marshmallow. They also added the phrase “limited edition,” which influenced consumers to feel this box was somehow even more lucky than the original. Today’s box is back to the classic red but features each individual marshmallow floating through a rainbow.

Cap’n Crunch was another highly recognizable cereal mascot who had undergone quite a few transformations of his own. Back in 1963, his garb was much more militaristic and even included a sword for the Cap’n to hold. In 1999, the classic box underwent a friendly cosmic makeover for its special “Cozmic Crunch” edition. On this box, a swordless Cap’n happily shared the spotlight with a cycloptic green alien friend. And way back in 1980 it’s almost difficult to know what his emotion was –his eyes stared somewhat blankly into the distance. Compare this to today’s crystal-clear message: The Cap’n is literally spoon-feeding you his cereal, apparently in response to the audience request to “Crunchatize me, Cap’n,” which is featured prominently on the box.

HOVER OVER THE SLIDER TO SEE CEREAL BOX DESIGNS

After showing respondents unmarked images of cereal mascots, it became clear that some were much more recognizable than others, even if the cereal itself became incredibly popular. 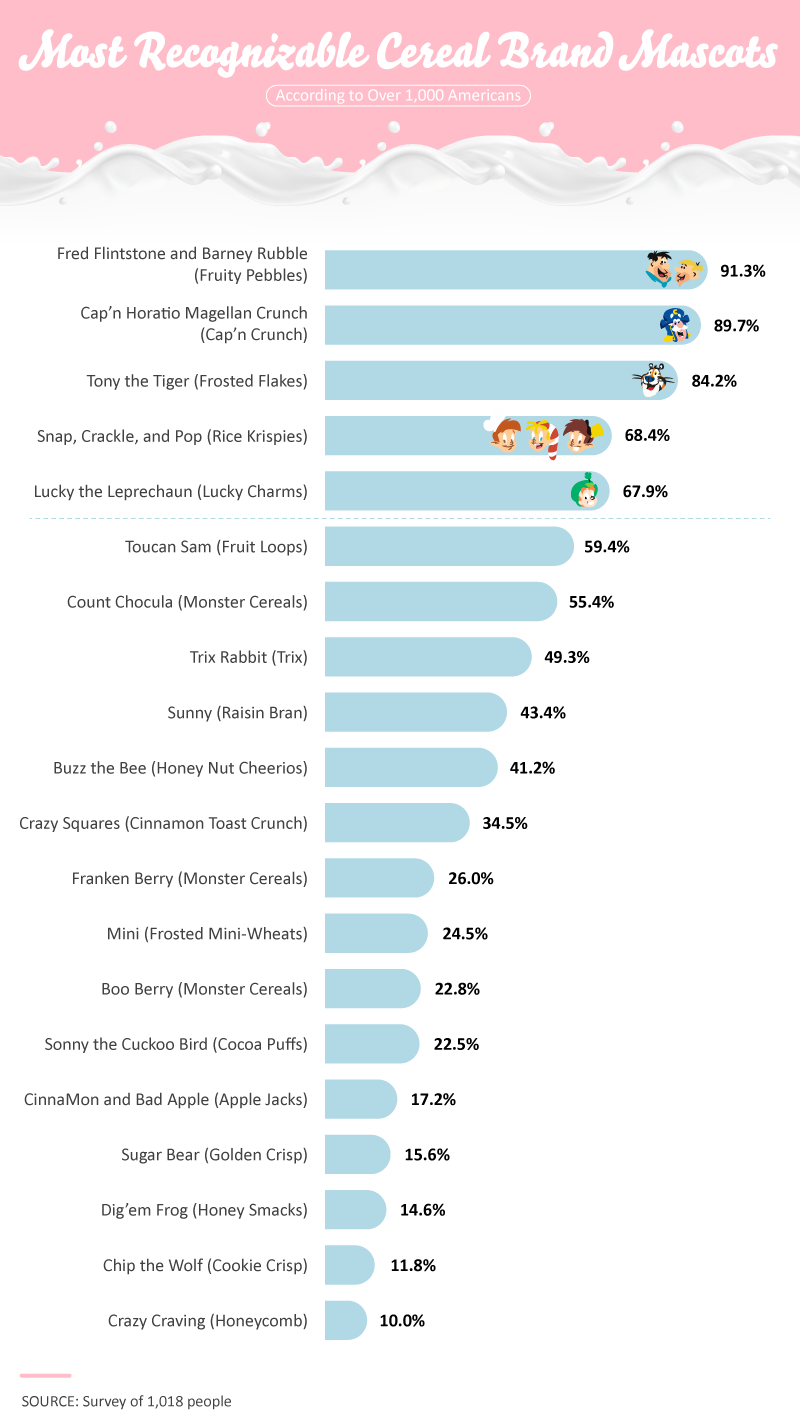 Fred Flinstone and his pal Barney were the most recognizable characters of all those we studied. Again, this may likely be because of the enormous, record-breaking popularity of The Flintstones series. The top-of-mind awareness that mascots are intended to reinforce may also be present just from people watching or remembering the show more than the cereal itself. Either way, more than 9 out of 10 respondents recognized the brand when we showed them pictures of Fred.

Cap’n Crunch, or more formally known as Captain Horatio Magellan Crunch, was the second most recognizable. When respondents saw his face, 89.7% were able to correctly identify his name and/or his cereal. Interestingly, Cap’n Crunch cereal is actually manufactured by Quaker Oats, whose mascot, Larry, wears a very similar outfit. Perhaps the two have contributed to each other’s brand recognition over time, as both represent popular breakfast foods. But there’s a few other key elements that likely give this captain the real estate he has. The word “crunch” is an effective onomatopoeia, making mouths water at the thought of biting into it. Then there’s the slogan “Crunchatize me, Cap’n,” which is essentially a direct order from a ranking military official. Finally, the brand leans on the power of alliteration, which has been proven to help recall. After just two short years on the shelves, this became the 9th most popular cereal in America.

Alliteration didn’t work as well for Crazy Craving, who was the least recognizable in spite of the fact that more than one million Americans can say they have roughly ten servings of the cereal every week. Perhaps his name lacked the specificity of Cap’n Crunch –we know there’s a craving here, but for what? One could also argue his face is on the creepy side, especially since he’s often featured walking through a person’s home. Just 10% of people got his name or the cereal he touts correct.

The next part of the study asked respondents a simple question: Which mascot is your favorite? 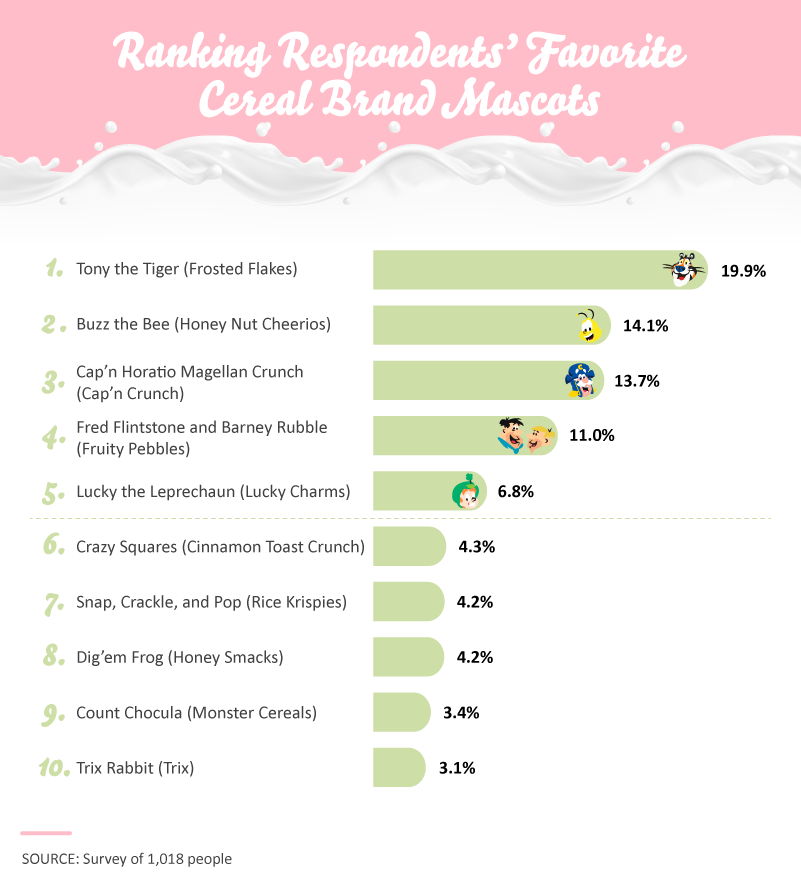 We know mascots are important to help establish a distinct personality of a brand. Tony the Tiger, whom people most often chose as their personal favorite, is the perfect example of this. In many of his TV commercials and on the boxes themselves, Tony is always seen doing something incredibly high-energy, like playing soccer or beach volleyball. Even though his initial debut was a Kellogg’s spokes animal that rotated with other characters, his popularity gave him staying power as the other characters faded away. Today, Tony’s GREEEEAT slogan is instantly recognizable across the country. According to branding expert Colleen Fahey, this auditory presence is a major part of his appeal. Respondents certainly appreciated and were more likely to call him a favorite than any other.

Buzz the Bee, or the Honey Nut Cheerios mascot, was the next most popular. Having first debuted during a recession, the little bumble bee today has become a symbol of good health. But, perhaps what truly separates Buzz the Bee from the mascot pack is how honorable his goals are. He just wants us to be healthy. According to copywriter Abby Mackinnon, “Other mascots represent colorful … sugar-packed cereals that are already made for kids. BuzzBee has to work harder to market his naturally flavored breakfast.” The cereal describes itself as part of a “heart-healthy eating plan” and has advertising that often shows older members of the family getting their health back on track in an enjoyable, delicious way. 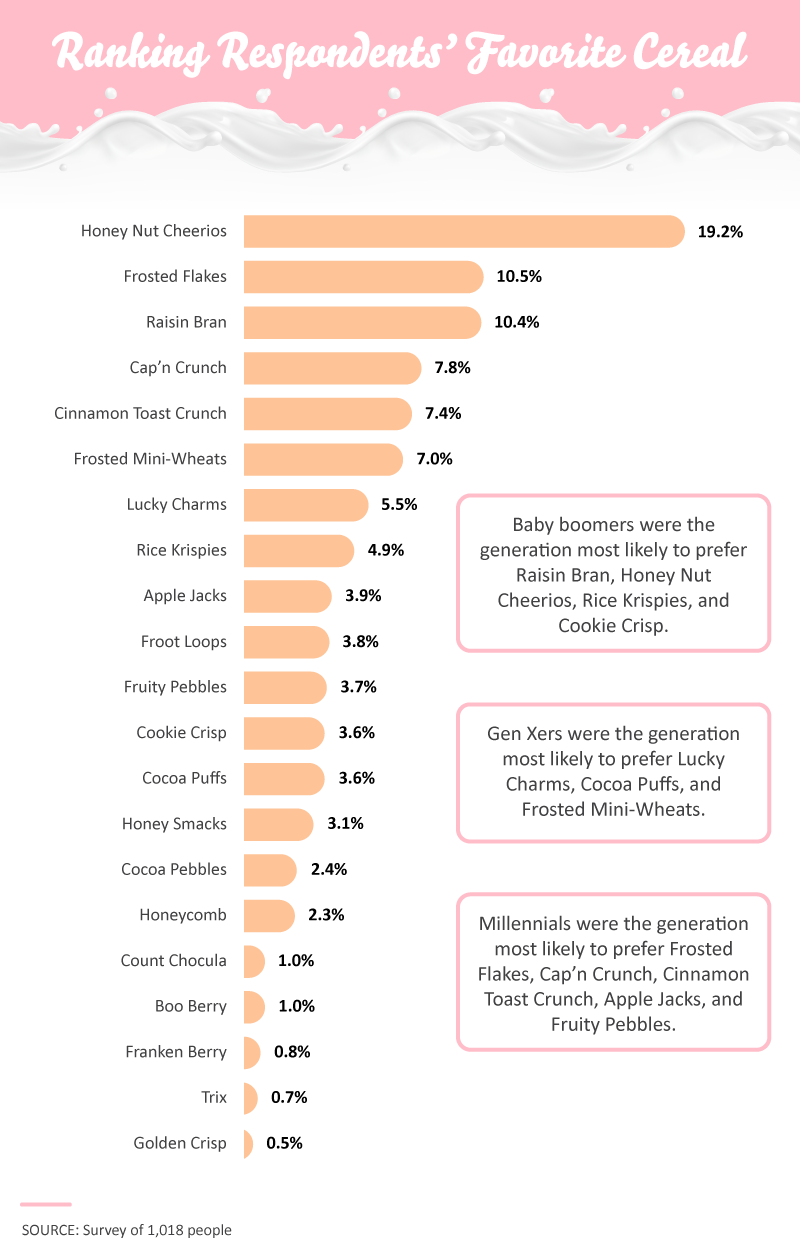 This time Honey Nut Cheerios rose all the way to the top. Sixteen percent of people chose this cereal as their number one favorite, with baby boomers especially likely to do so. Perhaps the older audiences were particularly drawn toward the heart healthy promises, as risk for heart disease is known to increase with age. We also noticed that among respondents whose favorite cereal was Honey Nut Cheerios, over half were unable to correctly name Buzz the Bee, the brand mascot. A similar phenomenon occurred with Raisin Bran, another baby boomer favorite, for which only 50% could identify the mascot.

Millennials most often enjoyed Frosted Flakes but could also usually remember the mascot. Of those who chose Frosted Flakes as their number one favorite cereal, only 13% couldn’t identify Tony the Tiger correctly. That said, millennials also often enjoyed Cap’n Crunch, Cinnamon Toast Crunch, Apple Jacks, and Fruity Pebbles more than other generations.

Gen Xers were most likely to prefer Lucky Charms, though only 6% of people overall chose this as their number one favorite. Lucky Charms are reportedly “magically delicious” and make no promises whatsoever to have health benefits. Made from corn starch, corn syrup, and sugar, the appeal of the cereal appears to be all in the taste, not the aftermath. Perhaps Gen X has not yet aged out of enjoying sugary goodness.

Mind of a Mascot

Another crucial goal of a mascot is to engage its audience in conversation. Considering how many hundreds of people were able to correctly discuss each cereal figurehead, it’s safe to say that these mascots did their job. Tony the Tiger had people ready for a day of sporty activities, while Buzz the Bee reminds us to take care of our heart and family. And the Flintstones are still popular among millennials, though the show stopped airing ages ago. When we bring these boxes home from the store, we’re bringing home more than just a simple image. We’re bringing home memories.

The power of branding and marketing on these boxes is truly fascinating. The art of marketing when applied to the tastes of food can create some pretty powerful combinations. That said, companies must figure out the science of telling the story correctly, lest they end up like Crazy Craving. Today especially, brand recognition and storytelling can be done effectively through SEO, or search engine optimization, if you know what you’re doing. At BestSEOCompanies.com, experts have already taken the time to sift through everyone that can help you take care of your own SEO. If you’re interested in the top 50 available SEO experts that you can trust, head to Best SEO Companies today.

We collected responses from 1,018 Americans by administering online surveys via Amazon Mechanical Turk. To qualify for the survey, respondents had to indicate they typically eat cereal for breakfast. Of the 1,018 people surveyed, 52.7% were male, 46.7% were female, and less than 1% identified as non-binary. The average age of respondents was 37 with a standard deviation of 12 years. We used an attention-check question to swiftly identify and disqualify respondents who failed to read questions and answers in their entirety. The main limitation of this study is the reliance on self-report, which is faced with several issues such as, but not limited to, attribution, exaggeration, recency bias, and telescoping. This survey ran during June 2020.

These images are provided for entertainment purposes only. The names and imagery of cereal boxes and characters included may be the trademarks of their respective owners. Credit shall be given to the images taken from open domain and cannot be used for commercial purposes.

If you found this study to be GRRREAT, you’re welcome to share the data behind it. We’re sure those in your (cereal) circle would be interested in it as well. All we ask is that you link back to this page and that your purposes be noncommercial.