Following your favorite celebrity on Instagram, Twitter, or Facebook can offer a peek into their life—something you likely wouldn’t find anywhere else. But along with an inside look at their day-to-day routine, celebrities and influencers also use social media as a way to make money because of their sheer number of followers. The same can be said for a YouTube channel, where influencers with large numbers of subscribers use their content to advertise for different companies.

In a world where YouTube (51%), Facebook (49%), Instagram (39%), and Twitter (28%) are the top four most frequently browsed social media platforms, especially by Gen Z and millennials, and where food is the most followed content on socials, it’s no wonder that we see so many influencers and content creators making ads every single day (many of which are food-related). We wanted to get a sense of what consumers thought of sponsored content and whether they were likely to unfollow someone because of their ads, so we surveyed over 2,000 people to learn these things and more.

Lately, studies showed a major increase in the number of #ad posts—a 26.7% increase from 2020, to be exact. That’s great for the social media industry, but how do consumers feel about encountering social media ads?

Overall, 29% of respondents felt that the sponsored posts they saw were relatable, which is certainly an accomplishment for advertisers. Relatability is important, but a larger question remains regarding authenticity.

These days, influencers have made an impact on nearly every aspect of everyday life. Even people’s beauty routines are being heavily influenced by social media personalities. This begs the question: Do people feel that sponsored content makes a social media page more or less authentic?

The #ad hashtag that accompanies ad posts on Instagram, Facebook, and Twitter lets the consumer know that what they’re watching is sponsored. And on YouTube, especially, content creators often disclose when they’ve been given a free item that they might use in a video. Not everyone abides by these levels of transparency, but consumers seem to feel that influencers and content creators should always disclose these sorts of things.

Sometimes, buying items that are targeted to you on social media can be a good experience. There is, however, some risk of scams on these types of ads. When it comes to sponsored content from influencers, it’s a much more trustworthy experience, but not everyone is going to jump at the chance to buy something that an influencer or content creator is promoting.

Influencers make money from sponsored content by doing posts about a product they’re paid to promote or endorse to their audience. Would respondents be more likely to buy from an influencer that they follow or through a standard ad targeted to them on social media? For YouTube, respondents in the survey said they were more likely to buy from an endorsement (28%) than an ad (25%). Respondents narrowly said the same for an endorsement (27%) on Facebook versus an ad (26%) on Facebook.

The Morals of Social Ads

Ethics and morals have been a big topic in the ongoing conversation around the future of social media, especially when it comes to Facebook (and Instagram, which is owned by Meta—the company formerly known as Facebook). So much so that some brands have backed away from the platforms for a multitude of moral and ethical reasons, costing them millions.

In terms of targeted ads, lining up with consumers’ moral codes is an absolutely essential factor to getting their business, especially in the current climate. 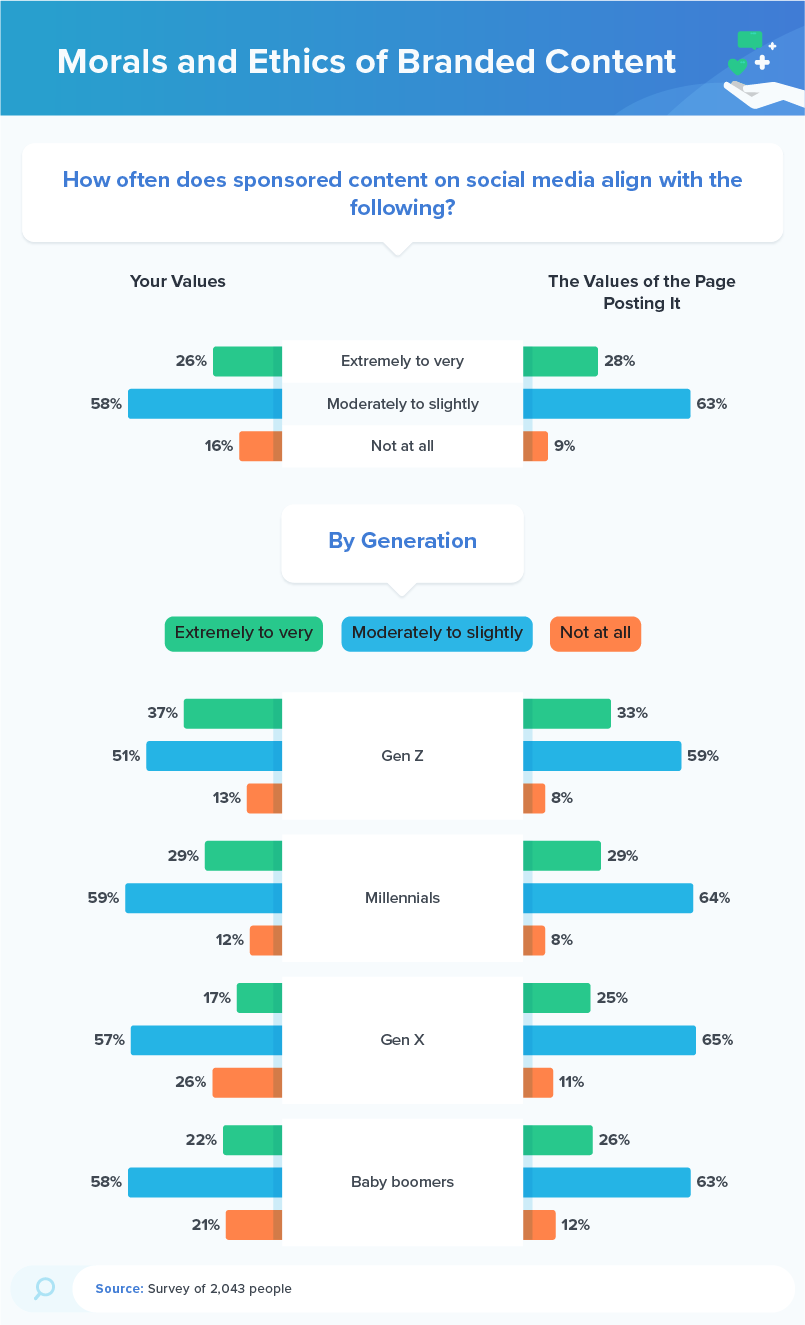 When it comes to the page posting the content, 28% of respondents said they feel sponsored content generally aligns with the values of said page. Millennials (29%) and Gen Z (33%) were the generations most likely to feel this way. LinkedIn was the platform where respondents felt sponsored content most aligned with their values (51%), followed by Pinterest (46%), Snapchat (43%), TikTok (37%), Twitter (36%), Instagram (35%), and Facebook (30%). 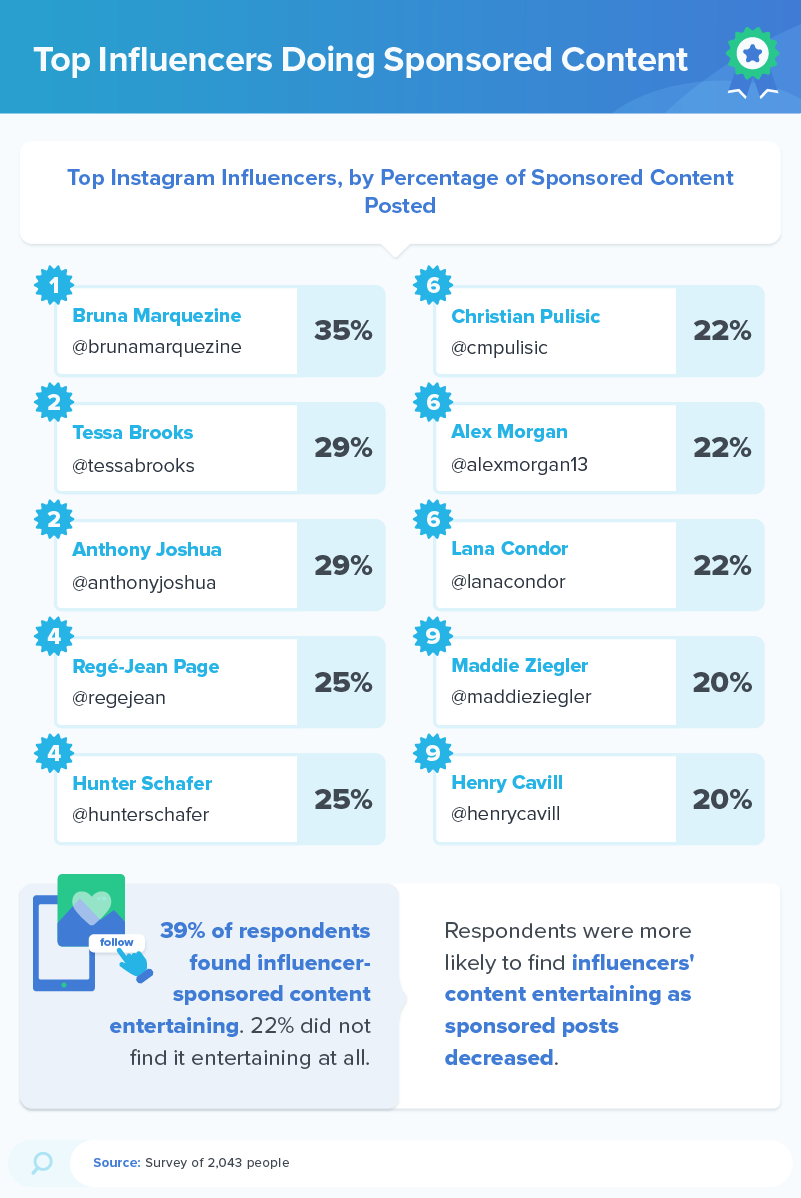 The Business of Social Media

Though sentiments surrounding sponsored content on social media were generally pretty varied among the 2,043 respondents surveyed, it’s clear that there is inherently more trust from consumers when buying because of an influencer rather than from a targeted ad on social media. That can only mean one thing: The business of social media will only grow larger as more people try to improve their rank on different platforms in a bid to make money from their social media presence.

Improving rank isn’t just important as an aspiring social media influencer, it’s also important for making money from your website and ranking higher on search engines. That’s where BestSEOCompanies.com steps in. We want to help you find the absolute best SEO fit so you can grow your website and watch your business flourish.

We surveyed 2,043 people about their sentiments on their favorite influencers using #ad. Among them, 49% were men, 50% were women, and 1% identified as nonbinary.

For short, open-ended questions, outliers were removed. To help ensure that all respondents took our survey seriously, they were required to identify and correctly answer an attention-check question.

These data rely on self-reporting by the respondents and are only exploratory. Issues with self-reported responses include, but aren’t limited to, the following: exaggeration, selective memory, telescoping, attribution, and bias. All values are based on estimation.

Are you a social media pro in the making or a business following the trends and sentiments around sponsored content on Facebook, Instagram, Twitter, and more? Feel free to share our study if you enjoyed it! We just ask that you link back to the study and that your purposes are noncommercial in nature.