Advertisements blend so seamlessly into our digital lives that they may not even register explicitly as ads. Your friends’ pictures may be indistinguishable from those of a corporation. Or your favorite celebrity may post about the latest product without divulging that their words were paid for. Believe it or not, Americans see an estimated 4,000 to 10,000 ads every day.

But how does the American consumer feel about all of this? And when interacting with ads, which ones appeal the most to the American psyche? We surveyed 1,052 people across the country to find out. Read on to see what we uncovered. 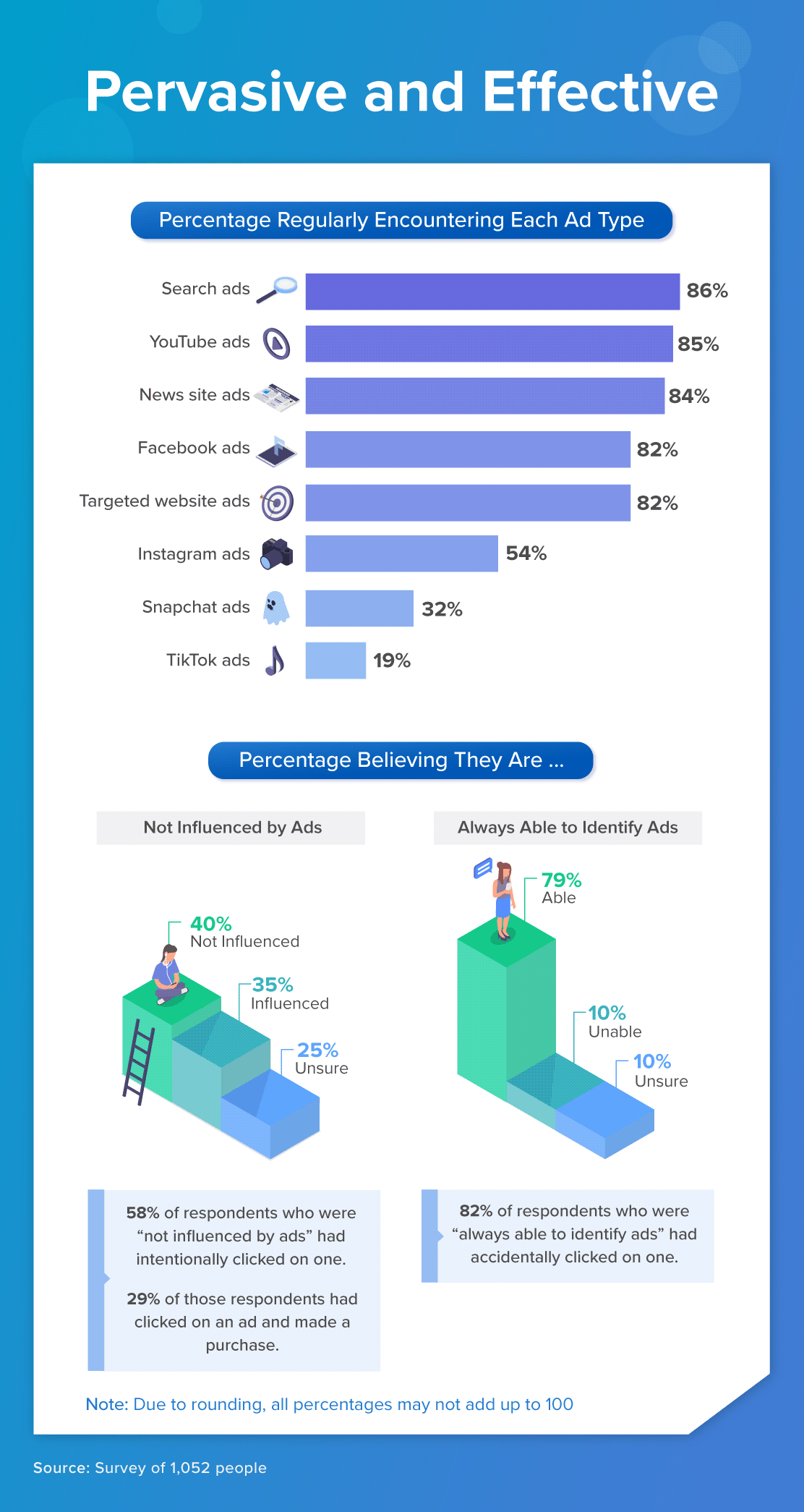 Most often, respondents stumbled upon search ads (86%), YouTube ads (85%), and ads on news sites (84%). This means that 16% or fewer people can regularly avoid ads as they search for information or watch the news. What’s more, many respondents were convinced these ads don’t influence them in the slightest. We also learned that, compared to other generations, millennials were the most likely to believe they weren’t influenced by ads and that they could always identify them.

Forty percent of respondents claimed the ads they came across had no influence on them. Nevertheless, 58% of this group had still intentionally clicked on an ad, and another 29% had made a purchase. To some extent, this demonstrates a lack of self-awareness when it comes to understanding just how impactful advertisements are on our lives. According to some experts, “the influence of advertising in everyday life is the power to alter what consumers think and feel.” These thoughts and feelings, however, are often unnoticed because branding and advertisements constantly play throughout our lives. Keep in mind that 82% of the respondents who claimed they could always identify ads had also accidentally clicked on one.

Mother Nature vs. the City 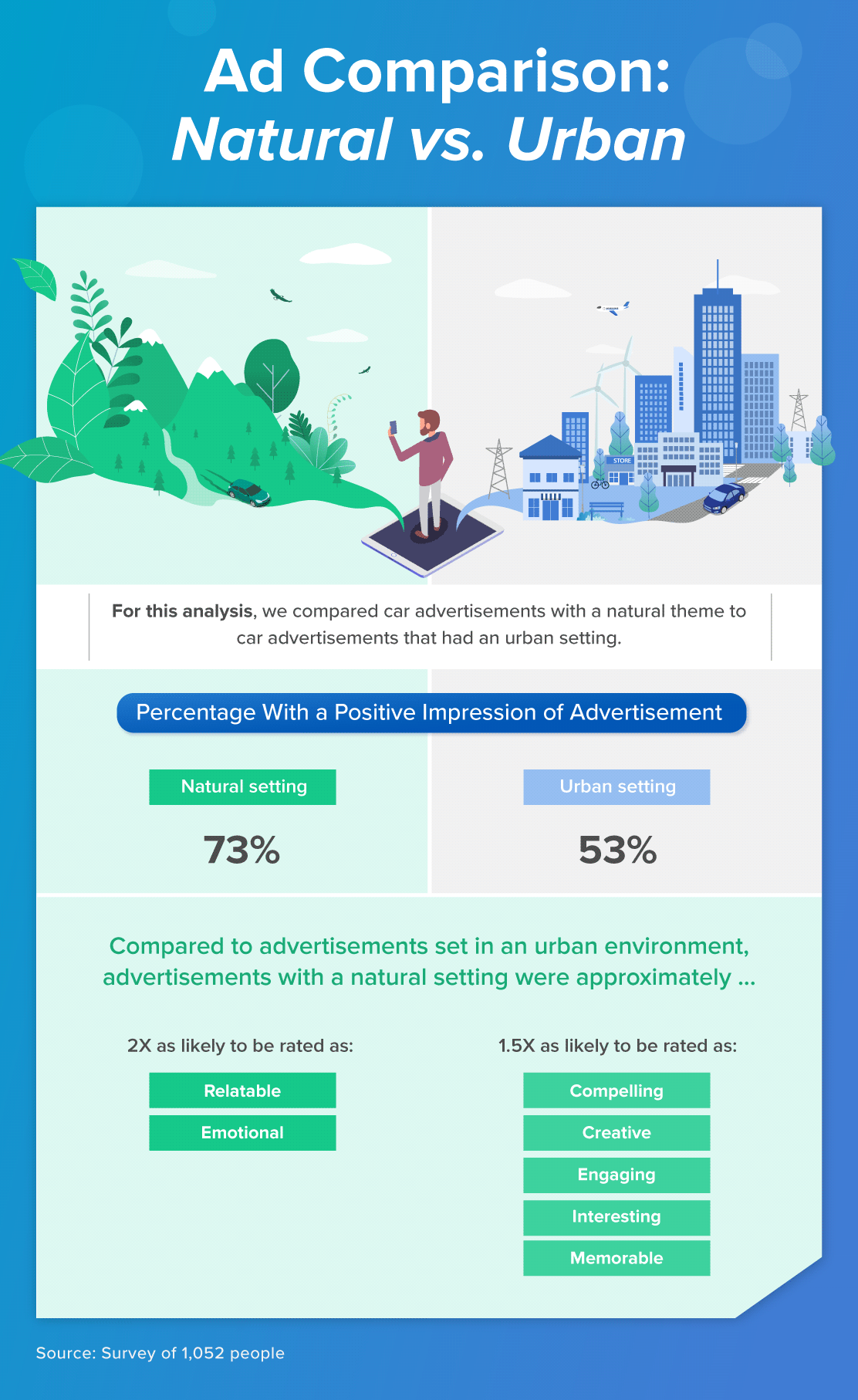 Although city dwellers are much more likely than those in rural areas to have internet and smartphone access, natural settings were far more appealing than city settings for ad imagery. Ads with natural elements received a positive impression from respondents 73% of the time.

To compare the success of a natural setting versus an urban one, we presented multiple versions of car advertisements to our respondents. We then asked them to rate each image for how relatable, emotional, compelling, creative, engaging, interesting, and memorable they found the ad. As it turns out, car advertisements with natural settings were two times as likely to be considered relatable and emotional. Other positive qualities were improved by nature-based images as well.

People are actually more likely to click on an ad accidentally than on purpose. While 63% said they had purposely clicked on an ad, 81% of respondents said they had accidentally clicked on one before. Perhaps the ad imagery integrates seamlessly enough that some of the traffic is coming through accidental clicks. Or perhaps there are just so many ads on the screen at one time that an accidental click is simply bound to happen. Either way, the majority of internet users are unintentionally led off-site by clicking on ads they never meant to.

When users did mean to click an ad, it was most often a search ad. In 2020, search marketers are expected to spend $15.7 billion on search ads, and for a good reason: People seem to actually want these ads, explicitly expressing intention behind their clicks. Unintentional clicks, on the other hand, were driven most often by ads on news sites. Recently, top-tier publishers like The New York Times and The Atlantic have come under scrutiny for running overly intrusive ads on their sites – to the point where it becomes difficult to read the news. These complaints may help explain why the most frequent accidental ad clicks are coming from news sites like these and others. 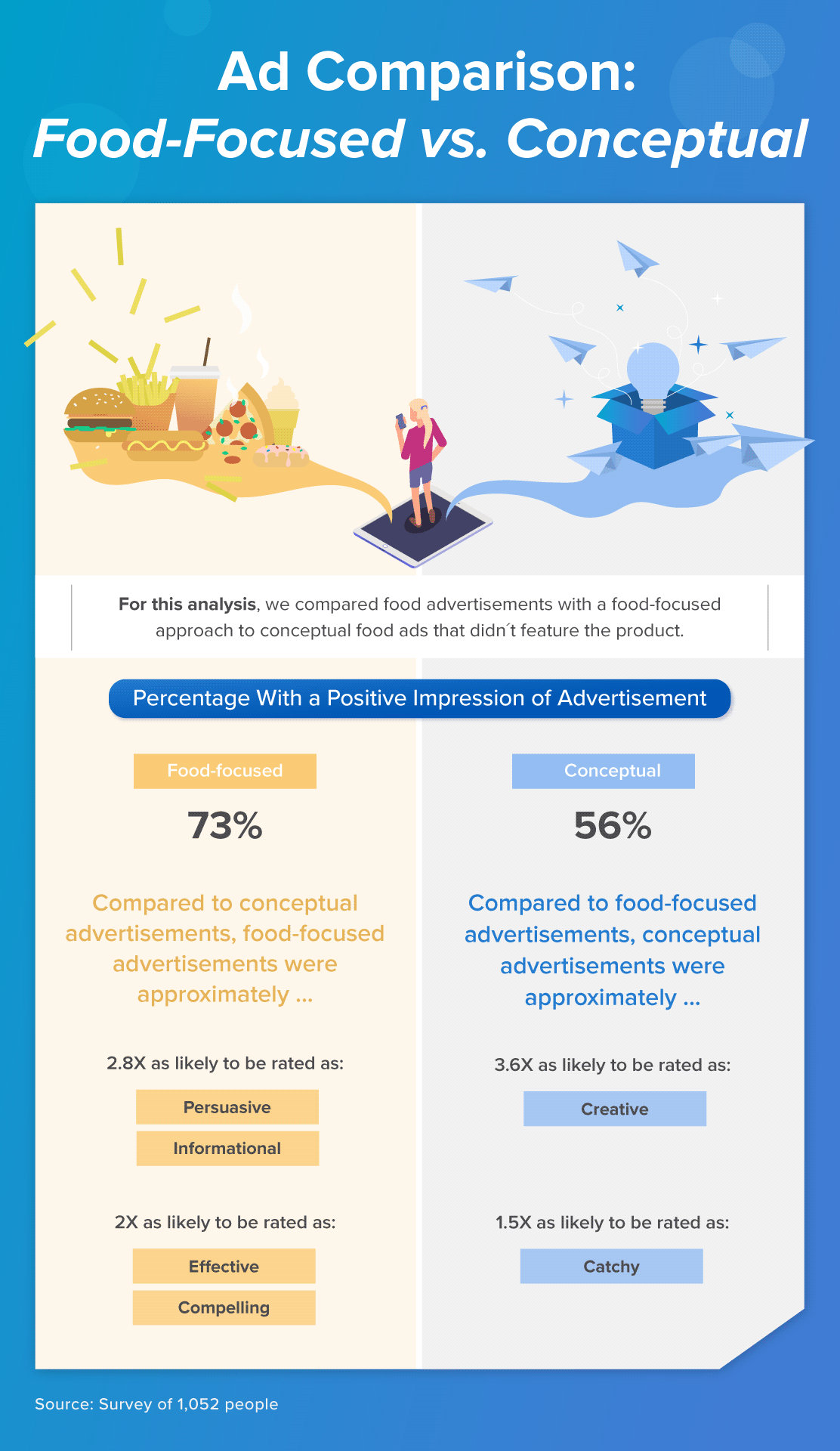 Food advertisements may be particularly hard to resist, as they have the power to evoke literal hunger. When we showed respondents two types of food ads – those featuring food specifically and those showing more conceptual ideas without food – the majority preferred the food pictures. Moreover, ads with food pictures were nearly three times as likely to be rated as persuasive and informational. They also beat conceptual ads for effective and compelling ratings.

Compared to food-focused advertisements, however, conceptual ads did still have some strong suits. They were 3.6 times as creative as food-based ads and 1.5 times as catchy. In short, conceptual ads were more memorable and creative but were ultimately less effective than ads showing food. 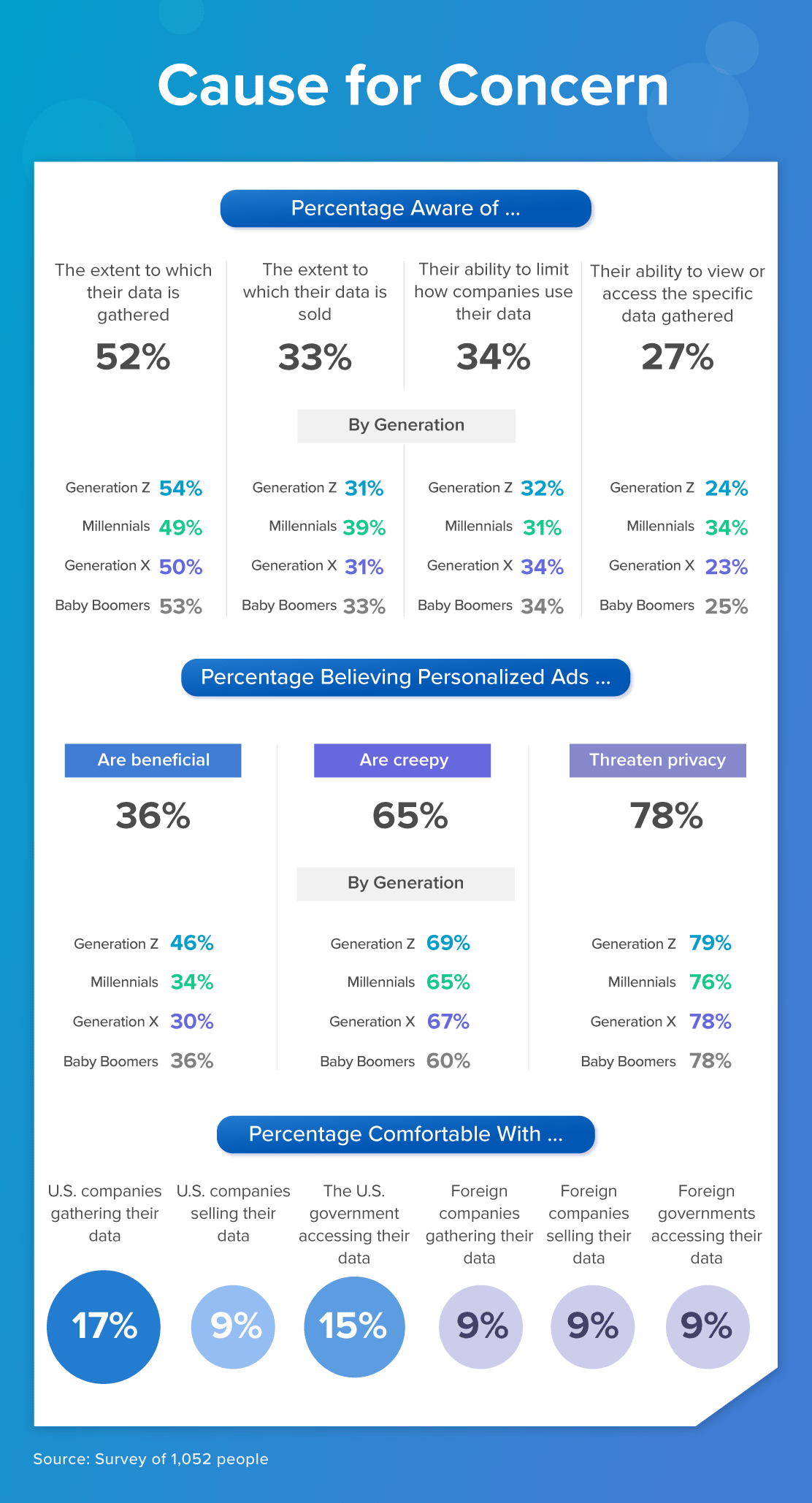 Personalized advertising enables advertisers to reach a consumer utilizing their specific demographic information. Only 36% of respondents felt personalized ads were beneficial. Most (65%) called them “creepy,” and even more (78%) said they threaten privacy. The youngest generation surveyed, Generation Z, was actually the most likely to consider these types of ads as “creepy.” They were also the most likely to feel these ads represented privacy threats. Ironically, personalized ads have been around for a large percentage of Gen Zers’ lives, and yet they were still the most attuned to the potential risks of this type of advertising.

Emotional Appeal or Just the Facts? 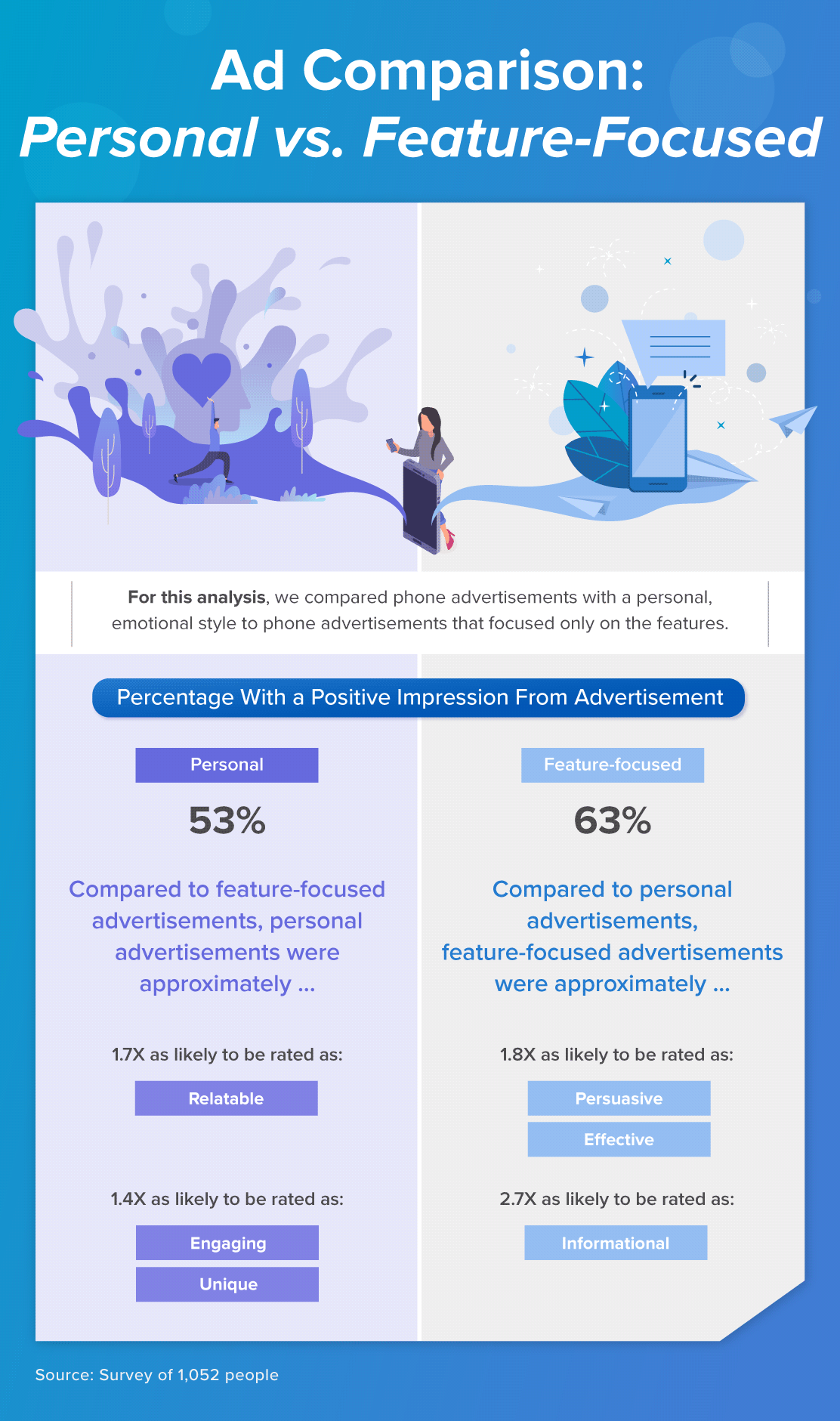 To better understand the impact of ads with a personal, emotional angle, we once again showed respondents different types of advertisements, this time within the phone industry. One group was shown ads that were feature-specific, and another group was shown ads that focused on a relatable, human tone. An interesting phenomenon occurred: Although respondents agreed that emotional ads were more relatable, engaging, and unique, they ultimately deemed feature-focused ads more persuasive, informational, and effective.

In studying over 1,000 people across the U.S. and how they feel about and respond to online ads, we learned that consumers might not fully understand the implications of what’s on their screens. While many claim to be able to identify ads or not be influenced by them, our data shows they’re often clicking and purchasing anyway. While they feel personalized ads are creepy and less positive, data also shows that this is a more effective way of advertising.

Unfortunately, SEO is another online area where lack of understanding runs rampant. While businesses understand the importance of choosing a good SEO team, they often have no way of knowing which team is better than another. Unless you’re an SEO expert, discerning between different approaches and results is near impossible. That’s why Best SEO Companies got started. We’re here to help you find the absolute perfect SEO fit for you and your business.

We surveyed 1,052 people in total for this study. 795 respondents reported on their experiences with digital advertisements, and 257 respondents participated in our ad perception experiment. 564 respondents were female, 484 respondents were male, and four did not identify as male or female. Among the respondents who participated in our survey, 201 were baby boomers, 202 were Gen Xers, 207 were millennials, and 185 were Gen Zers. Survey quotas were used to ensure sufficient sample sizes of each generation, so these respondent counts are not proportional to the larger population. Respondent generation was not collected or analyzed for the ad perception experiment.

To ensure that respondents took our survey seriously, all respondents were required to identify and correctly answer an attention-check question. For the experiment portion of our study, we employed A/B testing, and multiple versions of each ad type were featured. Ads were selected from three product categories that were selected for their relevance to wide audiences: automobiles, food and beverage, and smartphones. In many cases, questions and responses have been rephrased for clarity or brevity. These data rely on self-reporting, and strict statistical testing has not been performed on these findings. Potential issues with self-reported data include but are not limited to: exaggeration, selective memory, and attribution errors on the part of respondents.

Feeling compelled to contribute more non-ad content to your friends’ feeds? You’re welcome to share the results of this study, so long as it’s for noncommercial purposes, and you make sure to link back to this page.